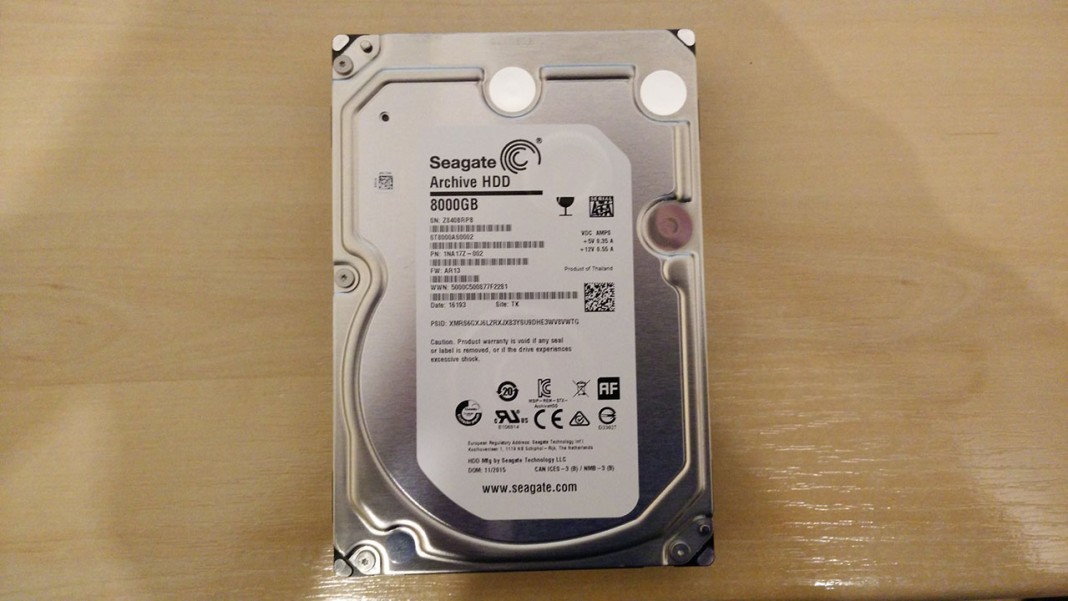 We now it is big, affordable and power efficiency. Now it is time to determine if it is fast enough and put the Seagate Archive HDD to the test. 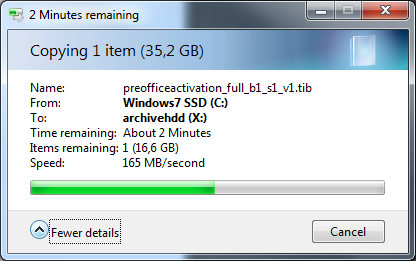 According to the official specs the drive does 150 MB/s sustained. It even performed a little bit better. A desktop HDD and SSHD will be faster (about 200 MB/s). Still not troubling performance here. Slow spinning drives such as the WD Green series show similar performance levels.

To test “real world” performance we have to fall back to traces. Hard drive actions during real scenarios were recorded and are simulated on each drive. Because this is a real time trace, a doubling of a score means the product is actually two times faster.

The Seagate Archive HDD places itself firmly in front of its direct competitor: the Desktop HDD.

For those interested I will quickly walk through all the subtests: 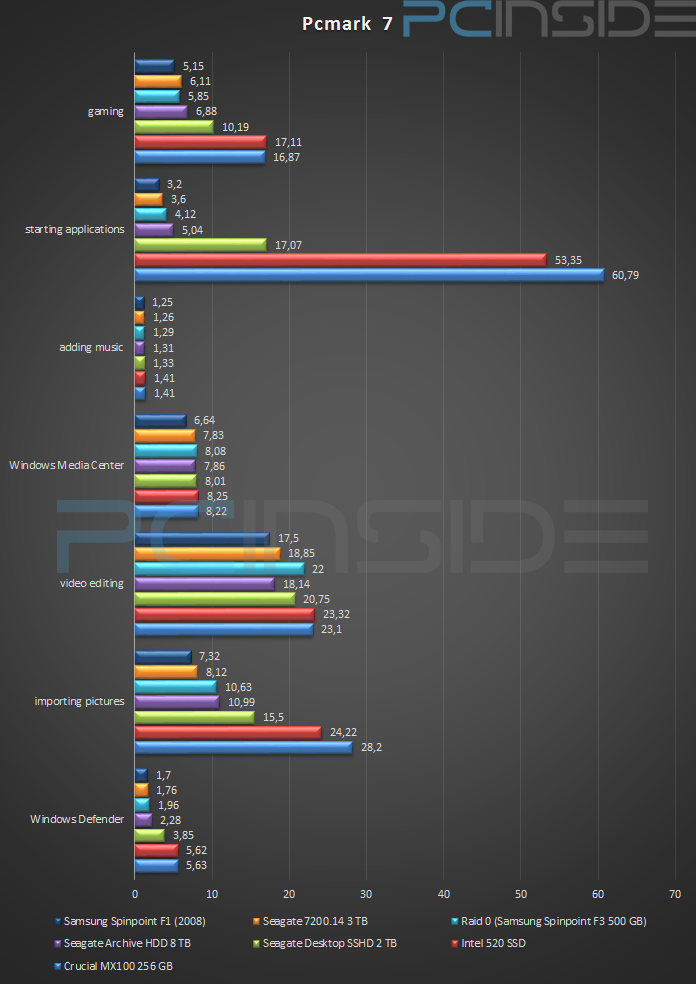 The Archive HDD beats the Desktop HDD in all subtests, except for the video editing test. Clearly the great access times and large buffers are helping this drive because one would assume it would be slower, not faster.

Access times are the thing that make SSD’s fast and hard disks slow. When requesting a lot of files even a 10ms delay can create a huge pileup. 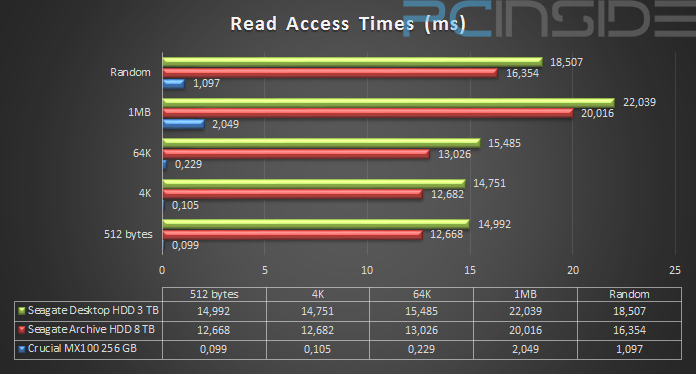 The Archive hdd has a much better access time than the desktop hdd. Differences are about 2ms across the board which roughly equals 15%. Very impressive! 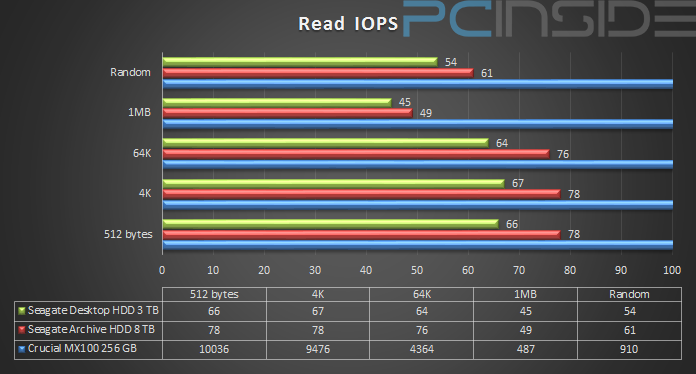 Given the recommendations of Seagate one would expect that the Archive HDD only excels at large files. Surprisingly the Archive HDD beats the Desktop HDD on the smaller file sizes, it is about 18% quicker. Especially these small files are an area where SSD’s are vastly superior. This is the region where performance counts and it explains how the Archive HDD won the Pcmark test.

This is the part that the SMR based drive should be really bad at. However due to the implementation of caching mechanisms the drive actually seems to excel at this area.

Unfortunately write access times can only be measured on empty drives and all my drives contain data. Instead I have tested the write response times. These include the time it takes to retrieve the file in addition to the access time. One might even argue this is a better test because it paints a more true picture. The test was conducted with Anvil’s Storage Utilities and a 1 GB test file and default settings. 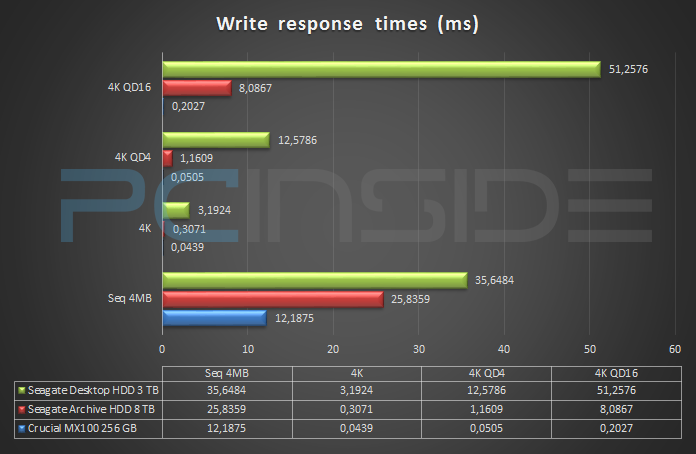 The Archive HDD is much faster at dealing with random write than the more traditional hard disk drive. On 4K a files it is 10 times faster. If we increase the que depth to 16 the differences become smaller but are still an amazing 6.34x! 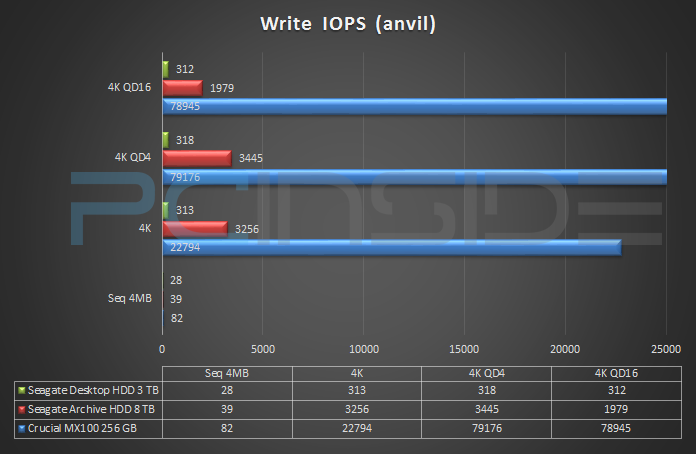 The Archive HDD seems to peak at 3400 write IOPS, which is impressive. Obviously the caching mechanisms are a huge boon here.

If we summarize the performance measured we can conclude that Seagate has outdone itself in compensating the SMR’s weak points. In fact I wish similar caching mechanisms would be applied to traditional disks because the benefits in typical consumer usage could be very noticable. That said our previous page showed that these drives are not suitable for complex tasks such as raid rebuilding. However I see absolutely nothing that would cause an issue for stuff like copying video files, updating games, installing games, etc. 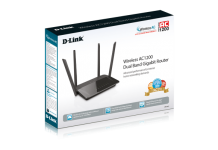 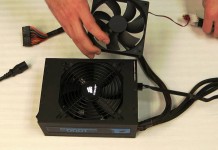 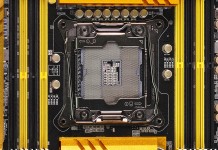 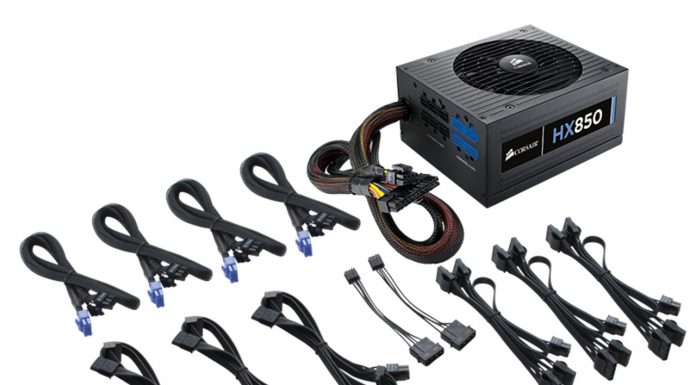